This post originally appeared on Techdirt. With schools, cell phones and a politician in the same headline, you’d think the story would be about another attempt to ban technology, but in Ontario, Premier Dalton McGuinty is telling schools to be open to uses for cellphones in the classroom. McGuinty, who […]

Last week, I attended the February #Twuneup — Covers Edition. #Twuneup is basically a monthly listening party (this was the second) run by a group of people in the Toronto Twitter community who share a love of music. There’s also lots of music sharing that happens on Twitter. I found […]

The United Church just gained big points in my book for their response to the athiest bus campaign in Toronto. The ads read: “There’s Probably No God. Now stop worrying and enjoy your life.” The United Church responded by adding an alternative response and running their own ads as a […]

[This post originally appeared on Techdirt.] Last week, the Toronto Police Homicide Squad launched a new website containing profiles of unsolved murder cases and wanted persons. Each profile contains details of the investigation — a written synopsis, photos and links to Google maps or even YouTube videos — and allows […] 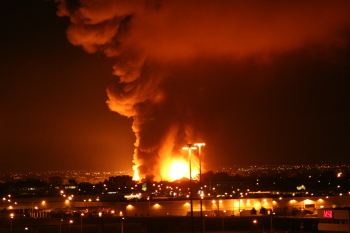 I woke up to this around 3:50am. A propane depot went up around Keele/Wilson. I felt it at Lawrence/Bathurst. 😐 (Photos from Rannie Turingan.) Update: video here

The Toronto Catholic District School Board is piloting a new religious knowledge test for fourth grade students in order to assess the effectiveness of the religious education program delivery. This is not a test of students, but a test for the board. Yet, the Toronto Star thinks it’s controversial. I […]

My girlfriend captured this video at the Improv Everywhere inspired (Toronto chapter) event at the Eaton Centre earlier today. My brother and I were frozen down the hall, but the large concentration of people were at the main fountain were the video was filmed. Notice how people gathered all along […]

Wait, so, Catholic schools are the devil but black schools make sense?

Look what I found: https://wiki.ubuntu.com/CanadianTeam http://ubuntu-ca.org/ http://ubuntutoronto.org/ “We will be hosting an Ubuntu Toronto User Group Meeting on… 25 July, 2007 6:30 PM… held at the linuxcaffe…”