This is getting just a little bit ridiculous. Rogers’ rates are already insanely high since they have a GSM monopoly in Canada. Their absolutely unrealistic pricing plans for the iPhone appear to have even got the attention of Cupertino. Now, despite the ongoing investigation by the CRTC into Bell’s throttling practices (which is generating enough bad publicity), Bell and Telus are in a race to the bottom in the value they offer customers through their mobile pricing plans. They want to start charging customers 15 cents per received SMS message.

Even at 10¢, a text message already costs the customer sending it almost five times more than it does to send the equivalent amount of data to the Hubble telescope. 15¢ per text message means that any time a customer sends or receives a message (which can’t be bigger than 140 bytes), they are paying the equivalent of at least $1,101 per megabyte—and, if they are, say, Bell customers sending a message to other Bell customers, Bell makes the equivalent of at least $2,202 per megabyte. And we’re, uh, guessing that some of that’s profit.

The growth in text messages has been nothing short of phenomenal. This volume places tremendous demands on our network and we can’t afford to provide this service for free anymore.

Somehow, I find that hard to believe. This is like the postal service charging you to receive mail, despite the sender already having paid the postage. (In which case, when ordering something online you’d have to pay shipping and “receiving”.)

What are they thinking? So unapologetically greedy… yet the only alternative is Rogers.

I have a new post at Techdirt, from the nobody-likes-anti-features dept: Rogers Looks For New Ways To Annoy Customers, Hijacks Failed DNS […] 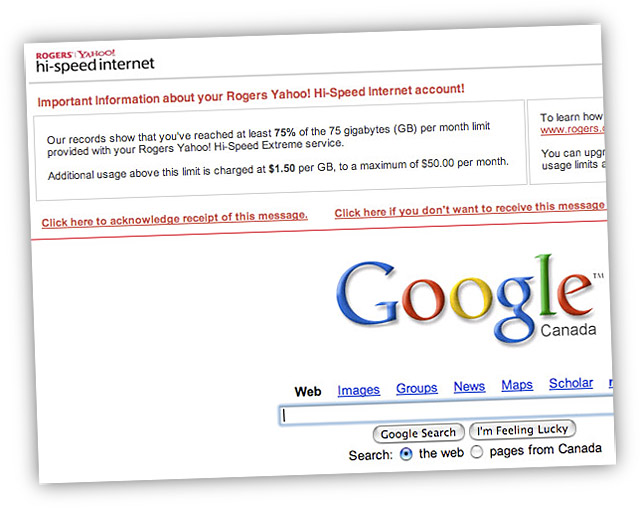 Last week, Rogers began experimenting with something called deep packet inspection to insert their own content into web pages that its users […]