When Facebook first launched music pages back in November 2007, I predicted a shift away from MySpace. A couple months later, I created a MySpace profile for myself, ending a self-imposed boycott. It was stupid of me to ignore the community (MySpace is simply where musicians are, unfortunately), but beyond that, Facebook Musician Pages are still really awkward.

It’s obvious that Facebook wasn’t designed with musicians in mind just by taking a simple glance at the music player (take my page for example). I’m a fan of simple, but there’s a difference between elegant and lacking. There isn’t even a way for artists to order the tracks in the playlist, nevermind enable downloads or include lyrics or album art. It was just a few weeks ago that Facebook began providing stats on audio (and video) plays in the Page Manager application, but you can’t even tell which songs people have been listening to. I’m the last person to obsess over meaningless profile stats on MySpace, but a simple play count is fundamental feedback.

On Facebook, you don’t friend a musician, you become their fan. Now, I wouldn’t want everyone who’s interested in my music to become my Facebook friend (that’s one of the annoying things about MySpace), but the alternative Facebook has chosen is very impersonal. You don’t message fans, like you would members of a Facebook group, but you send an “update.” You can’t reply to an update. It’s faceless, one-way. If someone wants to get in touch with you, they can post to your wall or discussion board and hope that you notice.

The relationship of “fan” versus “friend” is technically more accurate, but it gets in the way of forming a real relationship. The artist is a distant and mysterious figure, hiding behind some “wall” (har). Facebook was right to rethink MySpace’s approach, but they need to do much better.

Part of the problem is they’re using the same tool for corporations as they are for artists. It’s okay if a giant brand is faceless because it has a different type of face. Even if Facebook would just add some privacy settings, that could go a long way to allowing different uses, such as letting artists connect to their fans if they want to (e.g. “can fans send you a message in reply to an update?”, “should page admins be visible to fans?”).

Relationship with Other Artists

How about “none.” MySpace wins hands down here. The only thing remotely close that Facebook offers is the ability to “favourite” another artist page. If you want to find or communicate with other artists, you need to do this with your personal Facebook account. Or on MySpace.

This has been poorly thought out. There is no simple way to list upcoming shows! An artist must create a separate “Facebook Event” entity for every single show — that means guest list, photo, address, etc. Again, MySpace’s approach is riddled with problems, but at least you can have a simple upcoming events listing on your profile page without making a big deal of every event.

Plus, there are lots of problems with Facebook events in general that are magnified here. What if multiple artists are playing a show together? Do they each create separate events? How else can an event be listed on each of their pages? What about mutual fans — do they get multiple invites?

I’ve been experimenting with a “shell” event solution lately, creating an event for every show but (a) disabling extra content (posted items, photos, videos), (b) hiding the guest list (so I don’t have to send or monitor invites all the time) and (c) providing the basic details but linking to other Facebook events when relevant (here’s a recent example). I play a lot of shows with other songwriters, so when they setup their own Facebook events, I’ll create one of these “shell” events on my page that carries the core details but links back to their original event, and I’ll use their event to invite my friends.

A lot of these shortcomings offer good opportunities for third-party applications, but it’s not that simple. As far as I know (and I’d be happy to be wrong), third-party applications don’t have access to Facebook Insights (the stats Facebook shows you about your page, which are always about five days behind). Sure, you could use/create another audio player or calendar, but then that application has to maintain its own stats, and all of the sudden you’re looking in three different places every time you want to check on your Facebook page (nevermind MySpace, YouTube or your own website…). For example, I’ve chosen to use a Flickr app instead of uploading my photos to Facebook, and as far as Facebook is concerned, no one has ever looked at a photo on my page. Third-party apps are second-tier when it comes to stats.

I still think Facebook Musician Pages are an important tool for artists and I have hope that the improvements will keep coming (if I wrote this two weeks ago, I’d be railing on them for the lack of any stats on audio plays). But, despite the clumsy and mostly incompetent design behind a MySpace profile, they’ve got the core things right about music. The fact that music is an “oh yeah, that too” on Facebook shows — one size doesn’t fit all.

Father Thomas Rosica is the founder and CEO of Salt and Light, which, aside from being a TV station, has a fantastic […] 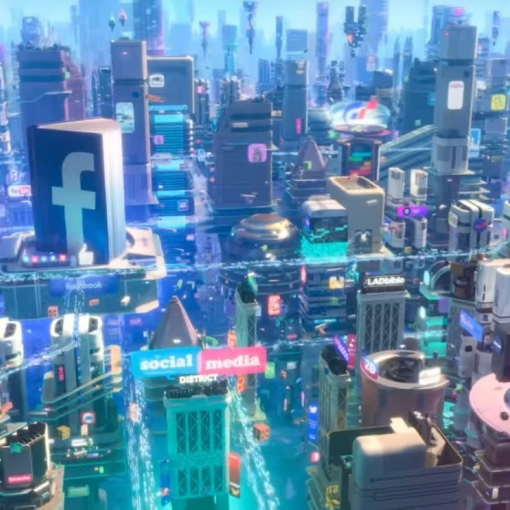 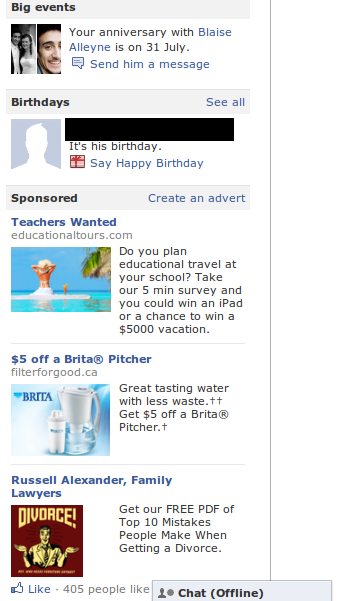 A week before my first wedding anniversary, Facebook started to remind me and suggested I celebrate by… sending my wife a Facebook […]